Our world is a diverse one that ought to be celebrated. Experts estimate that across the globe there are around 6,500 spoken languages today although around 2,000 of which have less than 1,000 speakers and are dying out. The significance of language cannot be overstated: it is the very means by which we order our thoughts and make sense of our lives. According to the Summer Institute of Linguistics, over two-thirds of the world’s children speak at least two languages; unfortunately in America less than 17% of the total American population speaks a second language in addition to English, drastically shrinking the scope of our world.

The Benefit of Speaking Multiple Languages

As someone who speaks multiple languages, I can attest to the way it helps reorder the very way in which you think. Many of the nuances of English go lost to the native speaker — it is only by experiencing a new language that we can better understand our own native tongue in new ways. Language is a door of potential as studies have found that children who master a second language gain the ability to learn a third language even faster! Furthermore, employees who speak more than one language earn an average of 20% more per hour than employees who only speak their native tongue. There are about a million reasons to learn a second language; unfortunately it only becomes more of a challenge to master a second or third language the older we get.

When to Introduce a Foreign Language to Your Child

It is during the first few years of life when our brains are more active than ever as they constantly build synapses in the brain that will help process critical thinking later in life. This means that the earlier a child is introduced to a foreign language, the greater the chance that they will become fluent and even take on a third or a fourth language! Experts suggest that teaching a child before the age of 10 is ideal, although some even state that before the age of five is better as they have not yet learned the grammatical structures of English — paradoxically it is this mastery of grammar that will make them better English speakers but will also make it more difficult to learn the alien grammars of foreign languages. In the United States the public school system will typically wait until a child is in junior high before introducing them to a foreign language — many other countries mandate that a foreign language be introduced in schools before the age of eight, thus attributing to the high percentage of multi-lingual students across the globe. Up until the age of eight, children are able to naturally acquire language skills through integration, imitation, repetition, songs, and games — this is when languages must be reinforced in order to have the greatest chance at fluency.

Learning Spanish as a Second Language

Many preschools have introduced a Spanish curriculum to help give children an early start when it comes to mastering a second language. Spanish is the official language of 21 countries around the globe with around 387 million native speakers — that means that there are more people on Earth who speak Spanish than English. As of 2015 as many as 13% of Americans speak Spanish — in fact studies actually suggest that the United States may contain more Spanish speakers than the country of Spain itself. By introducing Spanish curriculum lessons for preschool and later grades, schools are not only opening student’s minds, but encouraging diverse thinking that will help them later in life. Many parents actively search for tutors and private school programs that help reinforce a Spanish curriculum as it is believed that Spanish will soon become an official language in the United States. Even if a child does not continue their foreign language lessons after introduction, studies have shown the benefit of introducing a Spanish curriculum through improved test scores and creativity when compared to peers who received no foreign language lessons. If you want your child to have an ever-increasing number of opportunities, consider finding a program that specializes in teaching Spanish for preschoolers in your area. 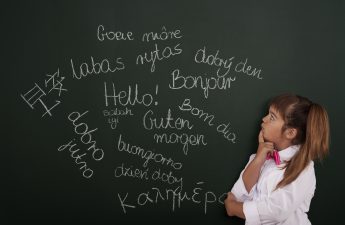 Bilingual Children Have A Leg Up On Life

If Your Toddler Can Use a Computer, They Can Learn Spanish New Teaching Methods Boost Gains